WOOSTER  Dr. Roger Clinton Moyer, age 82, of Wooster passed away on May 15, 2014 after a lengthy illness.
He was born May 23, 1931 in Kent, Ohio to the late Charles Clinton and Bessie Lucille Ravenscroft Moyer. Roger graduated from Kent State High School in 1949.   In 1952 Roger marrie his high school sweetheart, Sally Anne Horning, and together they had 6 children.  He earned a degree in Chemistry from Kent State University in 1953 and a doctorate of medicine from the University of Cincinnati Medical School in 1957. Roger performed his internship at Akron City Hospital before serving his Country as an Army Medical CorpCaptain at Fort Meade, MD from 1958 until 1960. From 1960 until 1962 Roger, his wife and four children at the time lived in Lakewood while he was in residency at Cleveland Metro General and Cleveland Babies & Children Hospital. Roger was a practicing pediatrician at the Wooster Clinic from 1962 until he retired in 1995 at the age of 64.
He was an avid Boy Scout and adult Scouter from age 12 up until his death. He earned the Rank of Eagle in 1948 and as a youth became a Vigil member of the Order of the Arrow.     Roger’s adult Scouting career began when he became Assistant Scoutmaster for Troop 63 at Saint Mary’s Catholic Church and went on to serve the Killbuck District as Activities Chairman, Scouting Coordinator, District Commissioner and District Chairman. He served the Buckeye Council in many roles including Council Commissioner and Council Vice President for Boy Scouting. He was on the staff of 17 Woodbadge Courses, of which he was course director for 8. One of the courses he directed was a Cub Scout Woodbadge Course.     Woodbadge is advanced leadership training for adults. Roger was awarded the Silver Beaver, which is the highest honor bestowed at the Council level. He also earned the prestigious St. George Award, which is the highest honor for Catholic Scouters.     Additionally, he was awarded the Silver Antelope, which is the highest regional award for adult Scouters. There were countless other lesser awards as well.Upon his retirement, Roger and Sally served on the staff of Philmont Scout Ranch every summer from 1995 until 2004. Roger was the Medical Director for this High AdventureScout Camp located in northwestern New Mexico.  He very much enjoyed Southwest Native American art work and culture.

He was very active with Saint Mary’s Catholic Church and was the Knights of Columbus Faithful Navigator from 1967 until 1969.   He was a 4th degree Knight. He served on the Parish Council and was a Eucharistic Minister.     He also served on the Wooster City School Board from 1978 until 1989, a total of three terms.   Additionally, he served on the United Way Allocation Committee for a number of years.     He was a member of the Wooster Kiwanis Club from 1997 until his death.

Roger dedicated his life to God, family and to programs involving young people. As a pediatrician he helped raise thousands of youngsters in Wooster as well as offering needed advice to countless parents. He will be missed by all.
Roger is survived by his wife, Sally Anne Horning Moyer of Wooster and his six children: Pat (Alan) Richardson of Cuyahoga Falls, OH, Chuck of Canonsburg, PA, Scott (Chaeli) of Akron, OH, Randy of Lakewood, OH, Annette (Curtis) Lambert of Fresno, CA and Melinda (Jeff) Bees of Lakewood, OH; eleven grandchildren and nine great grandchildren.
Calling hours will be held at and the McIntire, Bradham & Sleek Funeral Home, 216 E. Larwill St., Wooster on Sunday, May 18, 2014 from 5-8:00 p.m.     A Mass of Christian Burial will be celebrated on Monday, May 19, 2014 at 11:00 a.m. at St. Mary Catholic Church, 527 Beall Avenue, Wooster with Rev. Stephen Moran as the celebrant.   Burial will follow in St. Mary Cemetery.
In lieu of flowers, donations can be made to either the Buckeye Council Heritage Fund, 2301 13th Street NW, Canton, OH 44708 or to the Wooster Knights of Columbus Council 789, PO Box 1282, Wooster, OH 44691. 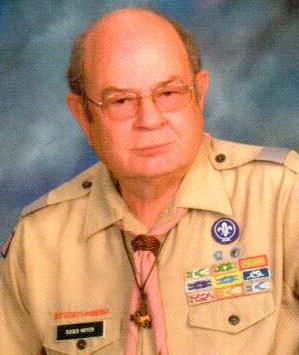