LAKEWORTH, FLORIDA – Mary Elizabeth Grove Olds Passed away peacefully on April 29, 2015 after a brief illness.
Mary was born in Warren, Ohio on November 12, 1930.   A graduate of Howland High School, she went on to earn a bachelor s and a master s degree in education from Kent State University.   In 1949, she married Robert W. Olds, and recently celebrated 65 years of marriage together.
Mary taught in Champion Local Schools, was Supervisor of Elementary Education at the Trumbull County Board of Education, and became a mentor and inspiration to many younger professional colleagues over her career. She also taught at the Kent State University branch in Champion, Ohio.
She was an active member of AAUW (American Association of University Women) and Delta Kappa Gamma, serving as president for both organizations.   She was also a past president of the Ohio School Supervisors  Association.   She was also a member of the Rebekah Lodge in Warren, Ohio.   She and her husband Robert have been members of the champion Presbyterian Church for almost 50 years.
Mary was chosen Warren Woman of the Year in 1977, AAUW Woman of the Year in 1984, awarded the Outstanding Administrator from the Ohio Department of Education in 1984 and most recently, honored with the Kent State 2009 Founders Award for her impact on the life of the Trumbull campus and the community.
A world traveler, she visited the Great Wall of China, explored the outback in Australia, and visited parks and museums in all fifty states in the USA.   She and her husband were volunteers at the Arapahoe National Forest in Colorado for six years.
She was preceded in death by her parents Hannah Belle and Lawrence Grove as well as brothers Frank (Sue) Ogden and Earl (Delores) Ogden.   A brother, Raymond (Ruth) survives.
She will be greatly missed by her husband Robert, son Dr. Robert Willard (Ann) Olds, Daughter Cheryl Louise (Jim) Rastetter and grandchildren James Robert Rastetter, Robert Eugene (Kathryn) Rastetter and Morgan Elizabeth Ann olds as well several nieces and nephews.
A memorial service will be held at 12:00 On May 13, 2015 at Oak Chapel United Methodist Church in Wooster, Ohio with Reverend Robin Dillon officiating.   Burial will take place at the Ohio Western Reserve National Cemetery.
McIntire, Bradham & Sleek Funeral Home, 216 E. Larwill St., Wooster is assisting the family.
In lieu of flowers contributions in her memory can be made to Oak Chapel United Methodist Church, 4203 West Old Lincoln Way, Wooster, Ohio 44691, or the church of your choice.
Online condolences may be left for the family at www.mcintirebradhamsleek.com 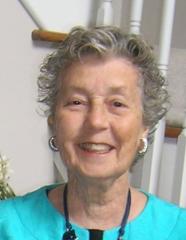