SHREVE  Jessie F. Colich, 92, of Shreve passed away on Friday, January 27, 2017 at the Wayne Co. Care Center.
She was born July 9, 1924 in Seneca County, the daughter of John Wesley and Julia Krumbaugh Teach.   She married G. Karl Colich on September 21, 1946.   He preceded her in death.
Jessie had been a seamstress for 82 years.   She was an avid reader, loved cooking, sewing, playing cards and working puzzles.
She is survived by her children, Natalie Chris  Bloomfield of Wooster and David Wesley Colich of Canaan; 8 grandchildren and many great-grandchildren.
In addition to her husband, she was preceded in death by her parents, sons, Michael Colich and Karl E. Grub  Colich, a grandchild, a son-in-law, Gary Bloomfield, a daughter-in-law, Connie Colich, a brother, Frederick Teach and sisters, June Karr and Catherine Auble
There will be no calling hours.
Graveside services will be held on Tuesday, January 31, 2017 at 1:00 p.m. at the Oak Grove Cemetery in Shreve with Pastor Joe Parsons officiating.
McIntire, Bradham & Sleek Funeral Home, 216 E. Larwill St., Wooster is assisting the family.
Those who wish may make memorial contributions to a charity of the donor s choice.
Online condolences may be left for the family at www.mcintirebradhamsleek.com. 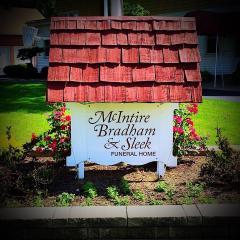