Marjorie E. Henderson, 91, Wooster, Ohio, passed away early Friday morning, May 19, 2017, at Affinity Hospital in Massillon, Ohio, following an extended illness.   She was born on February 21, 1926 to Wilber Carl and Greta Lucille (Cattell) Ritchie in Beloit, Ohio.
Marjorie graduated from Beloit High School as the salutatorian of the Class of 1944.   She worked at the Boston Store in Alliance, Ohio, and later was employed by the United States Post Office in Beloit until her marriage.
Marjorie married Norman E. Henderson on May 31, 1946 in the Beloit Friends Church. He preceded her in death on December 31, 2009.   Their first home was on Beloit-Snodes Road, and they later moved to Westville.   She was a member of the Westville Congregational Christian Church, assisting with Vacation Bible School, and volunteered with the Mothers  Club for their daughters  classes at both Damascus and Knox Elementary Schools.   In 1963 the family re-located to Mt. Vernon, Indiana, when Norman was transferred with Babcock and Wilcox, and in 1973 Norman and Marjorie moved to Wooster, Ohio, after his retirement.
Marjorie enjoyed attending the Wayne County Fair, Antique Gas and Steam Engine Shows, and Cruise-Ins with their 1941 Chevy. An avid reader, Marjorie regularly attended the Buckeye Book Fair and shared her collection of books with her granddaughters. She was interested in genealogy and traced the Cattell, Ritchie, and Henderson family trees.
Marjorie is survived by her daughters Beth (Gary) Siemens of Winamac, IN and Greta (Kent) Smith of Strongsville, OH; granddaughters Megan (Matthew) Scott of Frankfort, IN and Hilary (Blaine) Yaggie of Delphi, IN; great grandchildren Landon Yaggie, Tessa Yaggie and Owen Yaggie   all of Delphi, IN and Cooper Scott of Frankfort, IN.
Marjorie was preceded in death by her husband, Norman, her parents and a brother Dean H. Ritchie.
Funeral services will be held on Tuesday, May 23, 2017 at 11:00 AM at McIntire, Bradham & Sleek Funeral Home, 216 E. Larwill St., Wooster with Rev. Dean Siley officiating.   Interment will follow in Wooster Cemetery.
Friends will be received on Tuesday from 10:00 AM until the time of service at the funeral home.
Online condolences may be left for the family at www.mcintirebradhamsleek.com

Visitation
One hour prior to the service on Tuesday, May 23, 2017 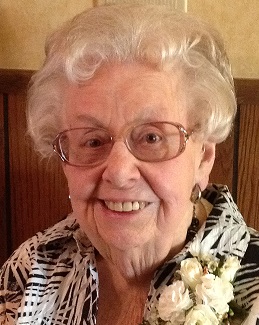