Together Again 
WOOSTER  Ralph Vernon Boyens, 96, of Wooster passed away on Thursday, July 27, 2017 at Wayne Manor Assisted Living in Wooster.
He was born July 27, 1921 in Chicago, IL, the son of John Henry and Emma A. Schultz Boyens.   He married Helen Mary Brown on September 28, 1946.   She preceded him in death on February 3, 2013.
He graduated from Fenger High School in Chicago.   His earliest job was helping his disabled father deliver Watkins Spices in the Model A, he then worked for the Spiegel May Stern collection agency for the Spiegel Co. in Chicago, the International Harvester West Pullman Works in Chicago in production before starting Journey Tool & Die Apprenticeship at International Harvester.
He enlisted in the United States Coast Guard in September 1942 and served in WWII in the North Atlantic and South Pacific as a Machinist Mate 1st class. He was honorably discharged in August of 1946.
After his service with the Coast Guard, he completed his apprenticeship at International Harvester West Pullman.   He then worked for the Ford Motor Company Aircraft Division as a Journeyman Tool & Die Maker for 4 years and he also worked for a Railroad Company in Hammond, Indiana and Illinois State Dept. of Transportation in highway construction.
While in Chicago his daughters, Norah Helen (Lloyd) Bertschy and Martha Anne Boyens (Jon) Bollinger were born.   In 1958 he moved to Wooster to join Borg Warner as General Foreman of the Tool Room and Cutter Grind Departments.   He also worked in ALite, Astro Fab where he learned to work with ceramics as Supt. of machining.   In 1965 he rejoined Borg Warner which became Rexroth Corp. from which he retired in August of 1984.
He lived in Wooster over 30 years where son, John Frederick (Mary Jo) Boyens and daughter, Ida Mary Jane Boyens were born.
He was active in the YMCA Management Club, Indian Guides, helped in construction at the Wooster Youth Baseball Field (Miller Fields) and umpire/Board of Directors of WYB.   He was active at the Zion Lutheran Church as an usher, serving on Church Council and Property Committee.
He retired to his wife s family home in Cedar Tree Point, Warwick, RI where he lived for 20 years before returning to a new home in Apple Valley, Howard, Ohio.   While in Rhode Island he volunteered 7 years at the Veteran s Hospital in Providence.   While there, he was a member of the VFW and Disabled Veterans and he flew with Honor Flight in September 2007 to the WWII Memorial.
He was the grandfather of, Carrie Bertschy, Ellen Bertschy (Larry) Cobler, Doug Bertschy, Katie Bollinger (Jonathan) Stull, Nathan Bollinger, Matthew Boyens, Leah Boyens, Joshua Boyens Brittle, and Joseph Boyens; great-grandfather to Wesly Bertschy-Hogue, Vincent and Evan Cobler, Isabelle and Landon Stull.
He enjoyed driving the car like a bat out of hell!   Reading the newspapers, aquasize and swimming, and was an active handyman completing many home improvement projects.   He was the best cat dad to Tiger Lilly Malone who was his companion since July of 2013.
Friends will be received 1 hour prior to the 2:00 p.m. service on Sunday, July 30, 2017 at the Zion Lutheran Church, 301 N. Market St., Wooster with Pastor Ann Paynter officiating.   Private family burial will be held in Rhode Island at a later date.
McIntire, Bradham & Sleek Funeral Home, 216 E. Larwill St., Wooster is assisting the family.
Those who wish may make memorial contributions to Honor Flight Cleveland Inc. 724 Coralberry Lane, Madison, OH 44057 or to the Zion Lutheran Church, 301 N. Market St., Wooster, OH 44691.
The family would like to thank the staff of Wayne Manor, Sprenger Hospice and Sharon with Cambridge Home Health.
Online condolences may be left for the family at www.mcintirebradhamsleek.com. 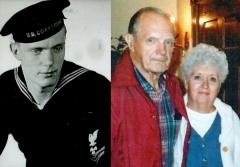