WOOSTER – Herman   Mays, Jr., 92, of Wooster, passed away Monday, February 12, 2018 at Wooster Community Hospital.
He was born October 23, 1925 in Wooster, the son of Herman Sr. and Sadie Bigler Mays.   He married Annabel Brewster on September 7, 1947.   She preceded him in death in November of 1999 after 52 years of marriage.
He was a graduate of Wooster High School and the Wooster Business College retiring in 1995 as a salesman for Napa Auto Parts for 20 years and previously had been employed at the former Neil Furniture Co. for 42 years, manager at Garison Interiors and was a Realtor with Silver Realty.   Herman was a member of the Wooster Jaycees, Madisonburg Lions Club, Wayne Co. Soap Box Derby Committee, Wooster Fireworks Committee, VFW and the Interior Design Society.
He was a member of the West Hill Baptist Church for 50 years and enjoyed going on fishing trips to Canada.
Herman proudly served his country with the US Navy during WWII from 1944-1946.
Surviving are his children, Barbara (Dan) Fickes, Amy (Dan) DeHass; grandchildren, Julie (Eric) Miller, Scott (Stacy) Fickes, Robbie (Meghan) Gehring, Rachel (Jason) Wolf and Sara (Brian) Mannal; 13 great-grandchildren; a brother, Richard (Barb) Mays of Arkansas and a special friend, Barbara Boyes.
In addition to his wife, Annabel, he was preceded in death by his parents, an infant son and his sister, Virginia Lower Mays.
Friends will be received 2   hours prior to the noon service on Friday, February 16, 2018 at the McIntire, Bradham & Sleek Funeral Home, 216 E. Larwill St., Wooster   with Pastor Eric Fairhurst officiating.   Burial will follow in the Wooster Cemetery.
Those who wish may make contributions to Honor Flight Inc., Attn:   Diane Gresse, 175 S. Tuttle Rd., Springfield, OH 45505.
Online condolences may be left for the family at www.mcintirebradhamsleek.com. 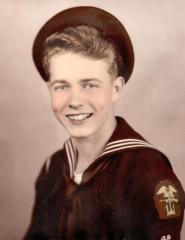