Together Again 
WOOSTER – Betty JoAnn AuFrance Kauffman passed away Monday, July 23 at Wooster s Danbury Senior Living Center.
JoAnn was born in Holmesville, Ohio on Friday, December 13, 1929 to Charles and Carrie (Warnes) AuFrance.   She grew up in Holmesville and graduated high school there.   She was a member of Holmesville Federated Church for many years until joining the Wooster United Methodist Church where she was active in the United Methodist Women s Association.   She volunteered much time there helping make the Lap Robes for the Lappers.
Volunteering was very important to her.   When her children were young she was a room mother and held several offices in the Wayne Elementary PTA.   She was a Girl Scout Leader, Camp Director, served as a judge for baking and sewing contests and was honored to be a Lifetime Member of the organization.   For many years she enjoyed meeting people as she worked at Stitches Unlimited.   She also volunteered over 2500 hours sewing at the Wooster Community Hospital.  She and her husband were charter members of the Cedar Valley Cloggers and also spent more than 40 years of dancing with the Gnat Boxers Square Dance Club.
In 1948 she married John J. Kauffman. They were married for 57 years until his death in 2006.   They had three children: Sharon (James) Stuart of Owensboro, KY, Dianne (Daniel McCauley, d.) Kauffman of Kent, OH, and J. Steven (Jill Thompson, d.) Kauffman of Wooster, OH.   She is survived by two grandchildren: Matthew (Ashley Holmes) Stuart of Richmond, VA and Amanda (Matthew) Ijames of Murray, KY.   JoAnn had one great-granddaughter, Harper Lynn Ijames of Murray, KY.  She is also survived by nephew, Melvin (Betty) Knowlton of Ashland, OH and many other nieces and nephews by marriage.
Besides her parents and spouse, she was preceded in death by her daughter-in-law, Jill Thompson Kauffman, son-in-law Daniel McCauley, and niece Judith Knowlton.   She was also preceded by her sisters and brothers-in-law: Verda AuFrance, Coesta and Mack McAdams, Opal and Melvin Knowlton, Mildred and Wilbur (Mutt) Inks, and a brother Cloyce AuFrance.
Visitation with be at McIntire Funeral Home, 216 E. Larwill St., Wooster on Friday, July 27, 2018 from 11:00 a.m   to 2:00 p.m.   Private interment will be held at the Fredricksburg East Cemetery.
The family suggests remembrances be made to your local Hospice in JoAnn s memory. 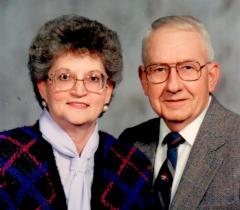