Eugene J. Gene  Grande O.F.S., 84, of Wooster died Tuesday, April 9, 2019 at Wooster Community Hospital.
He was born March 12, 1935 in Wooster to John P. and Antoinette Massaro Grande.   On August 10, 1968, he married Barbara A. Miller.   She preceded him in death in 2005.
Gene had worked in sales and had been the owner of Grande Honeytown Valley Veal.   He was a member of St. Mary Catholic Church and served his country in the U.S. Army during Korea.
He was on the Board of Directors of Mission Possible A to Z America to Zambia, a delegate to President Carter, a founding member and co-coordinator for Gabriel Project, a member of St. Vincent de Paul and St. Francis Cabrini Fraternity, active in the Prison Ministry at Richland Correctional Institution.   He was also active in Right to Life Ministry, served on the Board of Elections and was chairman of the Democratic Party.
He is survived by his children Lisa (David) Todaro, George P. (Sherri) Grande and Francis Grande all of Wooster, John (Carol) Grande of Medina and Mark (Bella) Grande of Los Angeles, CA; grandchildren Katherine Merrill, Stephen John,   Michael, Dr. Rachael and Thomas Todaro, Lesley, Antoinette, Emily, Eric, Genevieve and Vincent Eugene Grande; 8 great-grandchildren and sisters Patricia Frontz of Wooster, Colletta Baldridge of Lafayette, LA, Diane Martens of Celina, Adrienne Withrow, Marilyn Raby and Rachel Conrad all of Wooster and his special friend Joanne France and her family of Wooster.
Along with his wife, Gene was preceded in death by his parents, an infant son George David and siblings Frank, George and John Grande, Philomena Wright, Jeanine Wilson and Loretta Harsh.
A Mass of Christian Burial will be held on Monday, April 15, 2019 at 10:00 AM at St. Mary Catholic Church, 527 Beall Ave., Wooster with Rev. Stephan Moran as celebrant.   Interment will follow in St. Mary Cemetery.   A Franciscan wake will be held on Monday at 9:30 AM at the church.
Friends will be received on Sunday from 2:00-6:00 PM at McIntire, Bradham & Sleek Funeral Home, 216 E. Larwill St., Wooster.
Contributions may be directed to the Gabriel Project, c/o St. Mary Church, 527 Beall Ave., Wooster, OH 44691.
Online condolences may be left for the family at www.mcintirebradhamsleek.com

Service
Mass of Christian Burial Monday at 10:00 a.m. at St. Mary Catholic Church with a Franciscan wake at 9:30 a.m, at the church 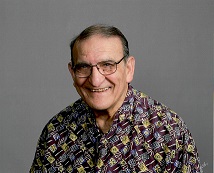