Wooster – Patricia C. Frontz, 88, of Wooster passed away on Thursday, May 23, 2019 at Wooster Community Hospital.
She was born March 26, 1931 in Wooster, the daughter of John P. and Antoinette Massaro Grande. She was the seventh of thirteen children and called herself the Middleman. She made herself a special pet of her father, earning herself the nickname Princess by her siblings.

She was an involved and loving mother. She cared for, fed, and counseled not only her own children and step-children but countless others often times until the wee hours of the morning. She was a competitive card and game player, showing no mercy even to the youngest grandchildren. Her kitchen was the heart of her home. Every person that walked through the door was fed delicious food in abundant quantities. And the coffee was always on.

She and her husband Richard owned and operated Frontz Drilling for many years. After retirement, they created wonderful friendships at their winter home in Florida. There too, the coffee was always on.

A Mass of Christian Burial will be celebrated on Wednesday, May 29, 2019 at 11:00 a.m. at St. Mary Catholic Church, 527 Beall Ave, Wooster with Rev. Richard Samide as celebrant. Burial will follow in St. Mary Cemetery. 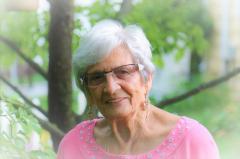