Larry Earl Dodds, 78, of West Chester, died on Sunday, September 1, 2019.
He was born January 17, 1941 in Bellefontaine to William Howard and Annabelle Gay Humphrey Dodds.
Larry graduated from Huntsville High School in 1959 where he was Vice President of his graduating class.  He then received several scholarships while attending The Ohio State University where he received his bachelor s degree in Business in 1963.  While in college, he served 4 years in the Air Force and Navy ROTC.
After college, he worked with Lazarus/Macy s Department stores where he met his wife, Rosalind, and they married on June 1, 1969.  They had their first child, David, on September 5, 1972, and their second child, Michelle, on May 26, 1977.  He continued to work for Lazarus/Macy s for 42 years where he had several positions including department manager, buyer, assistant store manager and director of operations.  These positions were for multiple departments in various stores, which had him traveling all over the US and overseas.  He retired from Macy s in 2005, shortly thereafter he and his wife became snowbirds  as the spent many wonderful winters with their friends from all over the world down in The Villages, Florida.
He enjoyed going on family vacations, taking care of and spending time his family (in particular his mom when she was still alive), spending time with his friends down in The Villages Florida, working on the farms, investing in the stock market, donating to various charities and watching OSU Football Games.
Larry is survived by his wife, Rosalind; children David (Stephanie) Dodds and Michelle (Jim) Grooms; grandchildren Rachel and Hannah Grooms; step-grandson Jacob Holland and a brother Robert (Karen) Dodds.
Larry was preceded in death by his parents and his father and mother-in-law John and Kathryn Hudson.
Friends will be received 2 hours prior to the 2:00 p.m. service on Friday, September 6, 2019 at McIntire, Bradham & Sleek Funeral Home, 216 E. Larwill St., Wooster with Pastor Dan Wingate officiating.   Entombment will follow in Sherwood Memorial Gardens.
Online condolences may be left for the family at www.mcintirebradhamsleek.com
Contributions may be directed to the Alzheimer’s Association of Greater Cincinnati, 644 Linn St., Ste 1026, Cincinnati, OH 45203.

Visitation
2 hours prior to the service on Friday 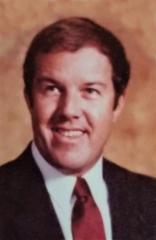