WOOSTER – Sally J. Bernhardt, 90, passed away on Tuesday, November 26, 2019 at LifeCare Hospice, Wooster.     She leaves her three children, Jon Bernhardt and wife Diana of Wooster, Kathryn Bernhardt and husband Philip Huang of Pacific Palisades, California, and Elizabeth Vartola and husband Anthony of Rio Rico, Arizona; six grandchildren; and three great-grandchildren.   Her husband, James R. Bernhardt, preceded her in death in 1996, as did her brother, William Bethke, in 1988.
She was born in Wooster on May 3, 1929 to Elizabeth Lott Bethke and Roland M. Bethke. A graduate of Wooster High School (class of 1947) and the College of Wooster (class of 1950), she taught English at Waynedale High School in Apple Creek from the 1960s to the 1980s.
After retiring from teaching, Sally devoted her time and energy to numerous civic organizations in Wooster, for which she received, in 1998, the City of Wooster Woman of Achievement Award.   She was actively involved with Every Woman s House (now part of OneEighty) since its very beginning, serving in numerous capacities, from playing with the children to editing communications to serving as President of the Board of Trustees.   She also was a member of the boards of the League of Women Voters of Wayne County (for which she served a term as President) and of Planned Parenthood, and was an enthusiastic member of the Traveler s Club.   An avid reader herself, she was an active participant in the Association of American University Women s annual used book sale as well as its literary book club.   Finally, as a board trustee of the Wayne County Historical Society, among other things, she rewrote and updated its by-laws, bringing them into the 21st century, and helped to curate its displays. For her contributions to the Historical Society, she received, in 2010, its George J. Schwartz Distinguished Service Award.   All of these activities and the friends she met through them greatly enriched her life in her later years.
For those who wish, in lieu of flowers, donations in Sally s memory may be made to a charity of your choice.
To commemorate her life, the family will be hosting an Open House at Sally s home at 2215 Friar Tuck Circle, Wooster, from 3:30-6:30 on Saturday, December 7.   All friends and neighbors are most welcome.
McIntire, Bradham & Sleek Funeral Home, 216 E. Larwill St., Wooster is assisting the family.
Online condolences may be left for the family at www.mcintirebradhamsleek.com.

Visitation
To commemorate her life, the family will be hosting an Open House at Sally s home at 2215 Friar Tuck Circle, Wooster, from 3:30-6:30 on Saturday, December 7.   All friends and neighbors are most welcome. 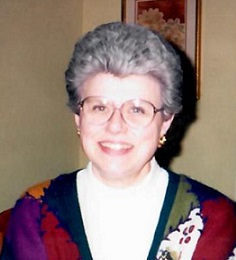