WOOSTER – Lloyd Leroy Fisher, 81, of Wooster died on Saturday, November 30, 2019 at Smithville Western Care Center.
He was born October 7, 1938 in Coshocton to Lloyd and Mary Lucile Donaldson Fisher.   On December 23, 1999 he married Karen Sue Aukerman.   She preceded him in death on December 1, 2017.
Lloyd was a member of First Church of God and had been an activity therapist at ACDC for over 29 years.   He enjoyed Boy Scouts and received the Order of the Arrow and Wood Badge.   Lloyd had served as Scout Master of Troop 69 in Apple Creek and of Troop 169 at the Apple Creek Developmental Center.   He also enjoyed ham Radio, Special Olympics and crafts.
He is survived by his son John Fisher of Germany; step-son Randy Lee Grove of Smithville; grandchildren Maria Fisher and Robert Fisher both of Germany and step-grandchildren Ryan Grove and Megan Grove.
Along with his wife, Karen, he was preceded in death by his parents; first wife, Gerry Spunger Fisher in 1997 and a brother Dale Louis Fisher.
Graveside services will be held on Tuesday, December 10, 2019 at 11:00 a.m. at the Apple Creek Cemetery with the Rev. Ken Thomas officiating.
McIntire, Bradham & Sleek Funeral Home, 216 E. Larwill St., Wooster is assisting the family.
Those who wish may make contributions to the Boy Scouts of America, Buckeye Council, 2301 13th St., Canton, OH 44708.
Online condolences may be left for the family at www.mcintirebradhamsleek.com. 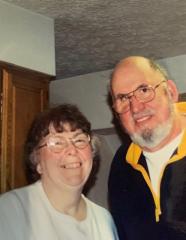