Wooster – Harry A. Engman, 96, entered eternal rest, Thursday, August 13, 2020 at his home with his companion, Cynthia Schneider, at his side.
Born April 18, 1924 in Antler, North Dakota to Harry Engman, Sr. and Ella H. (Anderson) Engman. The middle child, he had two sisters, Helen and Bernice.
Harry served in the U.S. Navy from August 15, 1942 – March 9, 1946, with an Honorable Discharge as an Aviation Machinist Mate, First Class. During his time in the service, he served in World War II.
He graduated from the College of Wooster in the graduating class of 1950 with a Bachelor of Arts in Geology. Harry also graduated in June 1951 from the University of Pittsburgh with a Master of Science in Geology.
Harry married Dorothy L. Sumption March 21, 1951, in Covington, Indiana. Dorothy passed away April 7, 2009. Together they had one son, Paul Engman. Harry and Dorothy traveled many states with the East Coast being their favorites.
He worked for Continental/Conoco Phillips for two years in Texas. Returning to Wooster, Harry worked for the Wayne County Engineers Office for 28 years, retiring May 7, 1990.
He was a past member of First Presbyterian Church, Wooster, Ohio. Harry enjoyed gardening, traveling, and time with his beloved cat, Rufus.
Harry was preceded in death by his wife, parents, sister (Helen), and a granddaughter.
He is survived by his son, Paul Engman (Kelley Durieux and her children, Ashley and Jared), Grandsons, Joel Engman (Emily Anne) and Joshua Engman, and great-grandchildren (Jubilee, Jameson, Jakai & Jayvon). Harry is also survived by his special companion, Cynthia Schneider, of 11 years, and her daughter, Bree Schneider and her children, Taylor and Maksim Schneider, who Harry had a special relationship with and loved as his own grandchildren. He is also survived by a sister Bernice Heller and his brother-in-law, Richard Sumption of Illinois.
Special thanks to Dr. William Lago, M.D. and his staff for their care, Dr. Cyril Ofori, and Pauline Daugherty (Home Health Aide) for her tender care.
Due to Covid-19, a private, family graveside service will be held at Wooster Cemetery with Military Rites with grandson, Joel Engman officiating. McIntire, Bradham & Sleek Funeral Home, 216 E. Larwill St., Wooster, is handling arrangements.
In lieu of flowers, contributions can be made to the American Heart Association, American Alzheimer Association or the Wayne County Humane Society.
Online condolences may be left for the family at www.mcintirebradhamsleek.com

Memorial Contributions
In lieu of flowers, contributions can be made to the American Heart Association, American Alzheimer Association or the Wayne County Humane Society.

Service
Due to Covid-19, a private, family graveside service will be held at Wooster Cemetery. 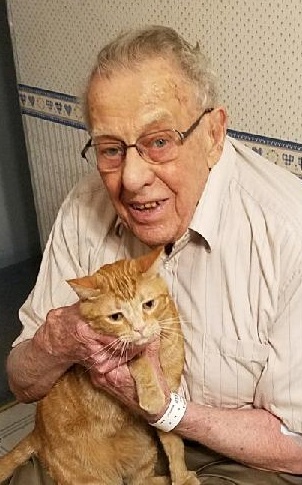