WOOSTER – Peggy A. Franks of Wooster passed away peacefully after a brief illness on Monday, August 17th at Hospice of Central Ohio in Columbus.
Born in Wooster to Roy and Faye Merriman on August 12, 1936, she graduated from Big Prairie Lakeville High School in 1954 and attended Ohio University. She was united in marriage to Harold D. (Hal) Franks on March 29, 1958 and they were devoted to each other until his death in 2013.
Peg was a Realtor, working primarily in building and land development with her husband. She held office in several local organizations including the Wooster Junior Women s Club, Wayne Elementary PTA, and was a charter member of the Wooster Elks Emblem Club. She also served on committees for the Red Stocking Revue, was a Cub Scout Den Mother, and was a member of Trinity United Church of Christ.
An excellent cook and gracious hostess, Peg organized countless get-togethers for family and friends, including an always-open door at their place at Prairie Lane Lake. There, she and Hal would always be willing to feed visitors, pull up a chair to the fire or take water skiers around the lake. Later, as NASCAR fans, they traveled extensively to races and built a community of friends in the Southeast.  A life-long animal lover, her home was not complete without a cat or two. Peg was a passionate and knowledgeable sports fan, cheering on her Cleveland Cavaliers through thick and thin. Peg will be deeply missed and remembered as a wonderful grandmother, mother-in-law, aunt and friend. Her strength, smile, kindness, sharp mind and sense of humor made her a joy to be with and an inspiration to many.
Peg was preceded in death by her husband, Hal, her son Scott, and daughter Betsy, as well as her parents and two sisters, Joan Speicher (William) and Karen Burgess (Jack Sr., who survives).
She is survived by her granddaughters, Courtney Olevnik of Erie, PA, Carley Franks of Wooster, and daughter-in-law Mary Franks of Wooster; niece Jill Speicher Arnett (John) of Columbus, nephews Chuck Burgess (Amy) of Nashville, Tennessee, and Jack Burgess Jr. (Tracy) of Loudonville.
Friends will be received on Friday, August 21sr from 4:00 to 7:00 p.m. at the McIntire, Bradham & Sleek Funeral Home, 216 E. Larwill St., Wooster.   Masks are required and social distancing will be observed.
Private family services will be held on Saturday, August 22nd at the funeral home with the Rev. Dr. Kevan Franklin officiating.   Burial will be in the Wooster Cemetery.   Live streaming on the Funeral Home Facebook page will begin at 1:00 p.m.
In lieu of flowers, donations in her memory may be made to Hospice of Central Ohio.
Online condolences may be left for the family at www.mcintirebradhamsleek.com. 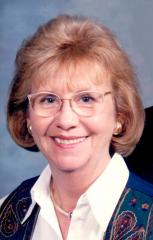