WOOSTER – Virginia Mae Blackwell, 98, Wooster’s first Black teacher, answered the call from God on Wednesday, March 3, 2021, at her home while surrounded by her children.
Virginia was born in Wooster on March 29, 1922 as the 2nd daughter to James Harper and Elizabeth (Price) Reynolds. She was a 1940 graduate of Wooster High School and then graduated from the then all Black, West Virginia State College in Institute, West Virginia in 1944 with a major in music education and a minor in history. Despite her qualifications, Blacks could not teach in Wayne County, so she began her teaching career in a 2-room brick schoolhouse in the historical town of Rendville, Ohio. This was the birthplace of her future husband Ralph l. Blackwell whom she married in 1945. The couple raised five children as their greatest achievement: Carolyn Huff of Wooster, Charlotte Blackwell of Columbus, Lois Lowery of St. Peterburg, Fl., James (Teresa) Blackwell of Wooster and Georgetown, Ky, and Loretta Sue Blackwell of Wooster.
Although unable to teach in Wooster, she was hired as a tutor and completed a graduate program at the University of Akron. She worked at Wooster Community Hospital and had a position in the Occupational Therapy Department at the Apple Creek Development Center before being offered a position to teach at the Ida Sue School for handicapped children in 1961. In 1963 she was finally able to become a part of the Wooster City School system. In 1979, Mrs. Blackwell was named teacher of the year and received a plaque from the board of education for her accomplishments after having taught for 23 years and upon her retirement in 1986.
Among many other positions, Virginia has been president of the former Pittsburg Avenue Elementary school PTA; president and vice-president of the Wayne County Retired Teachers Association; president of the Wayne Township Housekeepers Club; president of  After Five which was formerly a professional business women’s club; president of the Christian Women’s Association; treasurer of the Wooster/Orrville NAACP; the Genealogy Society; the Second Baptist Missionary Society; the Salvation Army Women’s auxiliary; Wooster’s Woman of the year in 2000; was presented with the city’s Quality of Life award; was secretary for the Wayne County Chapter for Exceptional Children; worked part-time in the College of Wooster’s office of admissions; treasure of Wooster’s Interfaith Housing; was former choir director and pianist at the Second Baptist Church in Wooster and retired as the church organist after over 40 years and a member for even longer. After retirement, she enjoyed traveling, spending colder months in Florida (where she often tutored while there), various concerts and activities and working on word search puzzles.
Mrs. Blackwell was preceded in death by her husband, her parents and her sister, Dorothy Grier and a grandson Kyle Kelley. Besides her five children, Virginia leaves behind her 11 grandchildren; Arthur Miner, Margo Miner, Darren Toomer, Andrea (Kip) Davis, Beth (Less’Han) McCullough, Camille Lowery, Ralph Blackwell, Tara Kelley, Courtney (Mitch) Van Dyne, Jamesa (Derek) Mollett, LoraLee Cross and Nathaniel (Staci) Lockett; 25 great grandchildren; seven great-great grandchildren and her spiritually adopted family Leroy and Cheryl Goff and their children Alexandria and John. She also leaves a host of nieces, nephews, cousins, and many friends.   Also surviving is her beloved dog, Toby.
Friends will be received at the McIntire, Bradham & Sleek Funeral Home, 216 E. Larwill St., Wooster on Friday, March 12, 2021 from 7-9:00 P.m.   Face Masks are required and social distancing will be observed.
Private family services will be livestreamed on the funeral home facebook page starting at 11:00 a.m. on Saturday, March 13, 2021 with Rev. Rickey Brown officiating.   Burial will be in the Wooster Cemetery.
Online condolences may be left for the family at www.mcintirebradhamsleek.com. 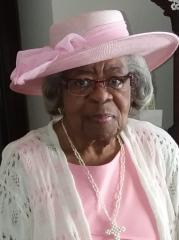