Kathryn served her country in the United States Marines Corps during World War II from 1943 to 1945.  She completed her undergrad studies at The College of Wooster. Kathryn then went on to earn a Masters Degree from the University of Massachusetts.   Kathryn was a Professor of Geology at the University of Dayton from 1953 to 1985.

She was a board member and volunteer at West View Healthy Living. Kathryn was a member of the 555th  Honors Detachment, AM Vets in Wooster and The American Legion Post #68.  She loved animals, especially cats.

Kathryn is survived by her son Douglas A. Gray of Wooster; nieces Karen Hussey and Megan Edstrom and a nephew Chad Edstrom.

She was preceded in death by a sister Dorothy Edstrom and nephew Thomas Edstrom.

A burial service with military honors will take place at the Ohio Western Reserve National Cemetery at a later date. 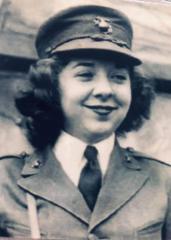