Thomas P. Chronister, 81, of Wooster passed away Wednesday, January 18, 2023 at The Avenue of Wooster.

Thomas served his country in the U.S. Navy.  He was a supervisor at Rubbermaid for 25 years before retiring in 1997.  Thomas enjoyed fixing things and attending tractor pulls, the Wayne County Fair and taking care of his lawn.

He is preceded in death by his brother Sam Chronister.

No services will be held. 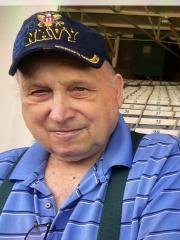