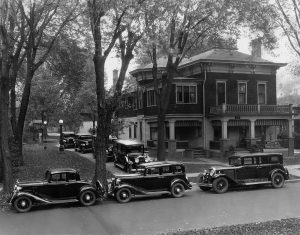 The McIntire Funeral Home started in 1902 when A.C. McIntire became associated with the Christine Brothers Furniture and Funeral Parlor, then operating in the Excelsior Building at 144 W. Liberty St.

In 1904, John Danford came to Wooster and purchased an interest in the Christine Brothers’ concern.  In 1914 A.C. McIntire bought a third interest.  After the Christine Brothers were no longer connected with the funeral parlor it became known as Danford, McIntire and Nixon Funeral Home.  A few years later, Mr. Danford  sold his interest and the firm became known as the McIntire and Nixon Funeral Home.

In 1997 Christopher Bradham and in 2000 Mitchell Sleek became associated with the firm and in 2012 became co-owners of the McIntire, Davis & Greene Funeral Home. In that year, the name was changed to McIntire, Bradham and Sleek Funeral Home to comply with state regulations.

While names and faces have changed over the last century, the quality of care we provide to the families we are privileged to serve has remained the same.