Joan French passed away after a period of declining health September 16, 2021 at the Ohio’s LifeCare Hospice facility in Wooster, Ohio. She was born March 14 1947 in Harvey, Illinois. Her parents were LaVerne and Arnold (Bud) Van Bergen. She grew up in Crete, Illinois, a small town about forty miles south of Chicago.
Joan moved to California in 1967. Over the next fifty-two years she lived first in Anaheim and later in Oakland. Joan worked her way up from the secretarial pool of the Autonetics Company (later Rockwell International) to be the secretary to the Director of Contracts and Proposals. She also worked for an art glass distributor and a stained glass company. Joan got her last job on a tennis court where she met the owners of the Royal Coffee Company. She started as the company’s bookkeeper; retired as a coffee broker/trader.
Joan’s philosophy of life was-It is what it is! Whatever came her way, she dealt with it and moved on. In 2019 she decided to leave California to move to Wooster so that she could be near family.
Joan was a person who was easy to like and to love. Everyone she met loved her purple and blue hair. She had just the right personality for colored hair. One of her friends believes when a rainbow appears in the sky, it is Joan shining her colorful light for all to see.
Joan was a listener and an even better talker. Her remarks were funny. They made people laugh. Many of her friendships were decades old. Yet, she was continually making new friends. Even though she had lived in Wooster for only two years, she had made many new friends in the neighborhood, the hood as she called it, while walking her four-legged friend, Aurami, the golden one.
Two of her greatest joys were to volunteer at the Wayne County Humane Society and to engage in the beautiful friendship that developed between Aurami and his owners. They allowed Rami to be at her disposal at any time. Often she would take him for long walks up to four times a day. When the weather was too hot, they would sit in the backyard under the maple tree chomping ice cubes together. As Joan would say, I love dogs more than people.

Joan had a generous spirit in so many ways. For those who wish to honor her, nothing would please Joan more than to have memorial contributions sent to the Wayne County Humane Society, 1161 Mechanicsburg Road, Wooster, Ohio 44691; Ohio’s LifeCare Hospice, 1900 Akron Road, Wooster, Ohio 44691; or a charity of one’s own choosing.
Joan is survived by her sister Carol Stewart; nephew, Greg (Karen) Stewart; niece, Laurel (Jim) Kane; great nephews, Graham and William Stewart; cousins, Susie (Larry) Brankov, Mick (Chris) Brindle, Gary (Cheryl) Gibson; life partner, Robert Braddock; and foster son, Johnny Meyer.
She was preceded in death by her parents, LaVerne and Bud Van Bergen; her twin sister, Jean Van Bergen; her cousin, Dennis Brindle; and her brother-in-law, Larry Stewart.
A private Celebration of Life service will be held at a later date.
McIntire, Bradham & Sleek Funeral Home, 216 E. Larwill Street, Wooster assisted the family. Online condolences may be left for the family at  www.mcintirebradhamsleek.com. 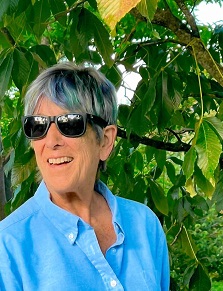