Ginny was born February 22, 1932 to Howard and Lois Angling Mosier.  She was one of 12 siblings.  She was also very proud to have been born on George Washington’s 200th birthday.  She graduated from Smithville High School in 1951 where she was a majorette.

Ginny started dating Arlo (Skeeter) Fockler in 1951 and they were married in Ginny’s parents’ home on June 22, 1952.  They were the parents of Rex, Jack and a baby girl, Lori Jean.  Baby Lori passed 8 days after birth.  When the boys were young, their dad was killed in a work-related accident.  She later married Noble Hitchcock.  Together they loved to fish on Lake Erie.  Ginny also had hobbies of making pottery and sewing.  She was a very good seamstress making dresses and doing alliteration for many friends and family members.  She worked at First Federal Saving and Loan in Wooster.  Ginny was also a member of St. John’s Lutheran Church in Lakeville.  She also enjoyed attending the Smithville Class of 1951 reunions.

She is surviving by her children Rex (Nancy) Fockler of Apache Junction, AZ and Jack (Kami) Fockler of Windsor, CO; stepsons Tim Hitchcock of Shreve and Scott (Nora) Hitchcock of Millersburg; and a brother Gary “Pat” (Carolyn) Mosier of Killbuck; 7 grandchildren and many great grandchildren, nieces and nephews.

Ginny was preceded in death by 7 brothers and 3 sisters; her husbands Arlo Fockler and Noble Hitchcock; a baby girl Lori Jean and a stepson Jerry Hitchcock.

Friends and Family will be received by the family 1 hour prior to the service at the funeral home.

In lieu of flowers memorial contributions may be made to Ohio’s Hospice LifeCare, 1900 Akron Rd., Wooster, OH 44691.

The family would like to thank the staff at West View Manor and Ohio’s Hospice LifeCare for making our mothers finally months and day so peaceful. 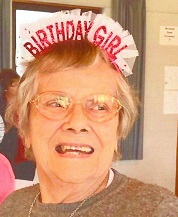